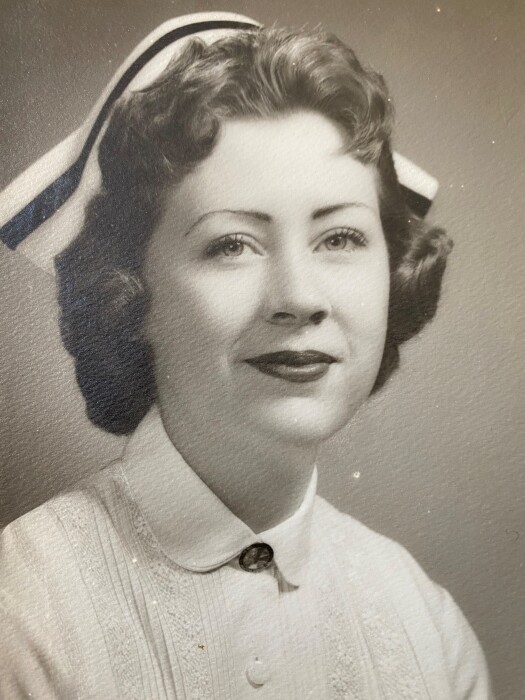 Barbara Joan (Byram) Coons was born on August 22,1937 in Florence, Kansas. Barbara was raised by her grandparents, Scott, and Frances Byram, whom she regarded as “Mom and Dad.”    Barbara spent her childhood and school years in Florence, and upon graduation in 1955, she moved to Halstead, Kansas to attend the Halstead Hospital School of Nursing.

While in nursing school, Barbara and her nursing school friend, Edith, went to a local park one afternoon and began swinging on the swings.  It was there that they each met their respective husbands.  Paul Edward Coons took a fancy to Barbara, and his friend Glenn Rimbey took a fancy to Barbara’s friend Edith.  By 1958 both couples were married and became lifelong friends.

Barbara practiced as a licensed registered nurse in both Kansas and Missouri from 1958 until her retirement in 2011.   A model caregiver, she was exceptionally suited for the nursing profession, and received several awards at Saint Joseph’s Hospital for her excellence in patient care.

Barbara and Paul were long-standing members of Victory Baptist Church in Kansas City, and in their senior years, they attended Lee’s Summit Bible Church.  Barbara was an ardent believer in the Gospel of Jesus Christ, and a faithful follower of her Christian faith.   She was an amazing and kind-hearted person who was always there for her husband, her children, her grandchildren, and others who needed her.  She was the ultimate caregiver and selfless human, always doing everything for everyone else, never expecting anything in return, and often sacrificing her own needs, desires and hopes.

To the new angel Barbara in heaven: “You left such a special place in all our hearts.  You taught us how to be more selfless, more caring, and more loving to one another. You gave so much to others until your body could not give any longer.  You were the rock and the glue of your family, and we will look to your model to carry on without you.”

To order memorial trees or send flowers to the family in memory of Barbara Coons, please visit our flower store.