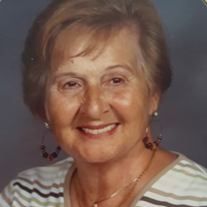 Barbara was born January 20, 1936 on a farm near Lebanon, South Dakota to Farril A. Maroney and Viola May (Walker) Maroney. Barbara was the 5th of 10 children. She graduated from Lebanon High School. After high school, she moved to Minneapolis, Minnesota where she attended college and worked for General Mills. Barbara's maternal grandparents lived in southern California, and one of her married sisters was living there with her husband who was in the Army. She moved to California in 1957, which is where she met an Army buddy of her brother-in-law, her future husband Earl Gaulding.

Barbara and Earl married October 24, 1959. Shortly after, Earl was transferred back to the Midwest. Earl and Barbara lived in Salina, KS and Lawson, MO while Earl finished his military obligation. Their daughter Tricia was born in Salina. After Earl's discharge they settled in Hutchinson, KS, near Earl's family. Barbara worked for a doctor's office in Hutchinson and that's where her daughter Melanie was born. Barbara had very close relationship with her in-laws that started in Hutchinson and that she cherished her whole life. In 1967, the family moved to the Kansas City area. After the move, Barbara chose not to work outside the home, so she put her strong work ethic to use in raising her family. She was active at Holy Cross Lutheran Church and School. She was a Girl Scout Leader and actively supported all of both daughters' activities. She returned to the workforce in 1976 via a temporary agency and then a property management company. She started work for FDIC in 1979 and retired from there in 1998.

Barbara had many interests and hobbies over the years. She and Earl loved to dance and they square danced for several years with the Swangers Square dance club. Having been a high school basketball player, she was an avid college basketball fan and was often consulted when it came to filling out brackets during “March Madness” tournament season. She loved to play cards, especially bridge. Barbara was widowed in 2002 and, due to her health, moved to Peculiar in 2005 to live closer to one of her daughters. She joined Bethlehem Lutheran Church in Raymore. She was fascinated by history and genealogy and was thrilled to join the Mary Sibley Chapter of the Daughters of the American Revolution in 2011. She loved to travel and experience new things and completed a long list of trips with family and friends all over the country and up in to Canada. More than anything she loved family, and she included her close friends in that family circle. Every year included at least one trip to South Dakota to visit her parents and other family members. She would go the extra mile to attend significant events for family members even if it meant traveling all across the country.

A celebration of Barbara's life will be held at Longview Funeral Home on July 23. The family will welcome visitors beginning at 1 p.m. and a memorial service will begin at 2 p.m. Interment will be at a later date in Thornfield Cemetery, Thornfield, Missouri. In lieu of flowers the family recommends memorial donations to any of the following organizations: Unleashed Pet Rescue (5918 Broadmoor St, Mission, KS 66202), Bethlehem Lutheran Church (310 Johnston Parkway, Raymore, MO 64083), Thornfield Cemetery Association (95 County Road 857, Thornfield, MO 65762).
To order memorial trees or send flowers to the family in memory of Barbara Gaulding, please visit our flower store.