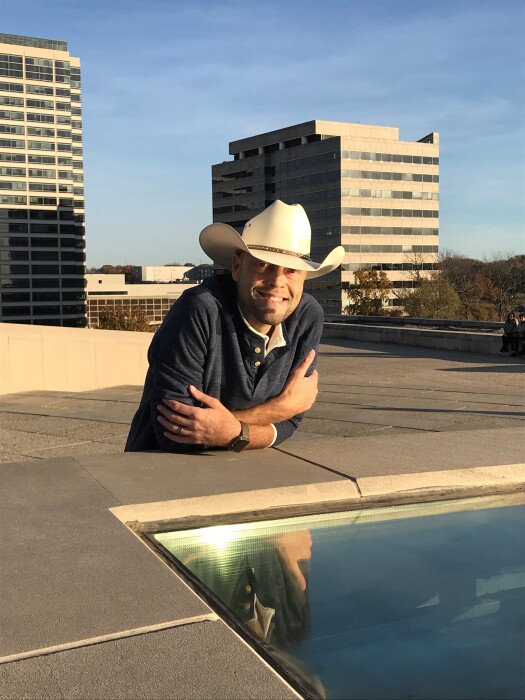 Bret Allen Engelkes, a man who above all loved God and loved people, went to his eternal home on January 4, 2022, after battling a myriad of life-long health struggles. And though he is absent from us, we know he is present with the Lord.

Bret was born May 5, 1976, to Gene and Melissa Engelkes in Grundy Center, IA, and was the first child of four.

He graduated high school in 1994 from Wellsburg, IA, and later graduated Northwestern College in Orange City, IA in 1999. From there, he married Daniela Ausborn in 2003, and together they had their three children, Tevah Zion, Elithea Grace, and Elaia Chai.

But that is only a brief synopsis of what he had done. We celebrate who he was. Bret Allen Engelkes was a man with an immense story, one that continues to reach beyond him, his family, or his history.

Few could match his love of life or talent to enjoy it to the fullest. He was born to tell stories—complete with funny voices—or win others over with his jokes and innocent pranks. However, he did not just win his friends over, he invested in them emotionally and spiritually. Whether for a day, a year, or a decade, if Bret knew you, then he loved you.

A natural musician as well, he could learn a song by ear and throw himself completely into performing it. In fact, he was talented at most things he put his hands toward, whether it be teaching, working around the house, or finding the best deals on almost anything.

Bret was a father who loved his children deeply, who prayed and strived to teach them not an empty religion, but a rich relationship with Christ. In fact, it’s that very passion and love for his Lord and Savior Jesus Christ that makes Bret’s testimony expand beyond his life.

Much like the Apostle Paul, Bret could not help himself when it came to sharing the Gospel. It was his life goal to tell all he encountered about Jesus and His love for them. He never saw himself better or worse than all he met, but fully understood that we all desperately need Jesus Christ. And also like Paul, it would take multiple books to show all he did in his mission to know God and make Him known with full confidence of Christ’s coming return.

Bret is survived by his wife and children, his father and his partner Judy Fisher, siblings and spouses David and Rebekah Engelkes, Kelly and Vince Mancuso, and Lindsey and Doug Freese along with aunts, uncles, nieces, and nephews who love him dearly.

In Lieu of flowers memorial contributions may be made to the family Go Fund Me Page- https://www.gofundme.com/f/memorial-and-family-blessing?utm_source=customer&utm_medium=copy_link&utm_campaign=p_cf+share-flow-1 or the the IHOP church- https://www.ihopkc.org/give/ in Bret's honor.

To order memorial trees or send flowers to the family in memory of Bret Engelkes, please visit our flower store.