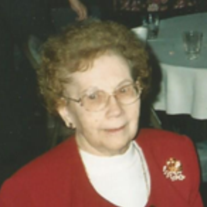 Catherine “Dixie” Davis passed away on Thursday, March 31, 2016 at the age of 89 in Harrisonville, Missouri.
Dixie was born on December 17, 1926 in Hardin, Missouri of Harvey and Mary Hileman. Dixie was the fourth of five children; John, Dan, Elizabeth, Dixie and Robert. She attended Business College in Kansas City and received an Associate of Arts degree. While there, she met Ray Davis who was attending William Jewell College with Dixie’s brother, Robert. When Robert was injured in the dorm, he was rushed to the hospital by Ray and there met Dixie. Dixie and Ray were joined in marriage on June 6, 1948. They celebrated their 60th wedding anniversary on June 6, 2008. They were blessed with one son, Paul.
Dixie was employed as office manager for the law firm of Mann, Pink & Swiss for her entire career. Ray and Dixie enjoyed traveling with friends and family, visiting places such as the Holy Land, Europe, and taking a cruise to the Caribbean. Dixie and Ray enjoyed vegetable and flower gardening, winning awards such as “Yard of the Week” for their community in Grandview.
Ray served as pastor to the Belvidere Heights Baptist Church for 34 years. Dixie enjoyed being a pastor’s wife and was involved in WMU, sang in the choir and served in many other ways.
Dixie was preceded in death by her husband, Ray Davis; her parents; and brothers and sister; and nephew, Scott Davis. She is survived by her son and his wife, Paul and Jan Davis; granddaughter, Katie and her husband, Joseph; grandson, Stephen; great-granddaughter, Sydney; great-grandson, Barrett; nephews, nieces, and several great-nieces and great-nephews.
A funeral service will be held on Monday, April 4th at 11:00 am at Longview Funeral Home, with a  visitation one hour prior. Interment will follow in Longview Cemetery.
To order memorial trees or send flowers to the family in memory of Catherine Davis, please visit our flower store.