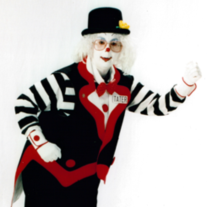 On the morning of Wednesday, August 9, 2017, Connie Lundeen, AKA Tater D. Clown, was welcomed into Heaven, complete with beautiful smile and of course, her “red nose.”

Connie was born to Carl and Millie Corriston on May 31, 1949. She joined brother, Ronnie and sister, Dottie and the family moved from Kansas City, Kansas to Grandview, Missouri, where Connie lived until her death on Aug. 9th. She went all through school in Grandview, continued her education at CMSU (now UCMS) then graduating with her degree in Physical Education from UMKC.

She was an educator in the Catholic School System for thirty-nine years, retiring in June 2017. Her career began at Our Lady of Peace, continued to Nativity, then Visitation, and finally to her beloved St. Elizabeth’s. To say she was an extraordinary teacher is an understatement.

Connie’s life touched the lives of thousands of children and young people in many ways. In addition to her chosen career as a Physical Education teacher, she taught children of every age, swimming and the importance of water safety. There are documented records of over 2,000 students. Two years of records could not be located. These were the “kids of Summer”, learning in Connie’s backyard pool! She was also a swim team coach in schools and communities.

In addition, Connie served as a little league coach for soccer, volleyball, baseball and basketball. Yes, she touched the lives of many. For years, she was an advisor helping Boy Scouts with their merit badges. Oh yes, Connie was a Cub Scout Den Mother as well!

Twenty-four years ago, Connie, AKA Tater, entered the world of professional clowning and never looked back. She attended clown camps and workshops all over the United States, learning from the very best. Connie, after a few years, took her teaching and coaching skills “under the Big Top” and became a clown educator. She was asked to develop a program to encourage young people to learn the skills of an entertainer by becoming a “real” clown. Her program development became the “hallmark” for kid’s clown camps across the U.S. Her methods encouraged kids to become self-confident and out-going in many ways. Twenty years ago, she founded Forever Young Clown Alley, and was lovingly tagged BOSS Clown, a highly respected designation in the clown world. This “Alley” will live on honoring her memory and providing love and laughter to the Veteran’s Hospital, City Union Mission, Charitable fund raisers and the list goes on.

Connie dearly loved her husband, Mike Lundeen. They were married for 47 years and 10 months. She also leaves her son, Christopher (Augie) and his wife, Lorena of Ventura, CA; son, Casey and his wife, Kandi of Harrisonville, MO; grandsons: Dakota and Sawyer; granddaughters: Dylan, Libbie, and Trystan, all of Harrisonville; and 5 sister-in-laws: Janis, Cathy, Donna, Edith, and Judy. She also leaves behind, 2 dear aunts and many loving cousins. Her sister and very best friend, Dottie (Frank) Pickren Scott of Pleasant Hill, MO mourns her loss but rejoices in knowing one day they will be reunited for eternity.

If Connie were with us today, she would call out “Bump a Nose.” Live. Love. Laugh.

A visitation will be held on Saturday, August 19th from 9:30 – 10:30 am at Coronation of Our Lady Catholic Church, 13000 Bennington, Grandview, MO 64030. A memorial mass will begin at 11:30 am, followed by a reception at 12:30 pm, all at Coronation of Our Lady Catholic Church. The family requests that those in attendance of the services wear "Island Attire." A private inurnment will take place at Longview Cemetery. In lieu of flowers, her wish was for everyone to donate potatoes to go to the Food Pantry, whether by the bag or the box, please bring them with you to the church. If you prefer, you can make monetary donations to the KC Hospice House in her memory.
To order memorial trees or send flowers to the family in memory of Connie Lundeen, please visit our flower store.