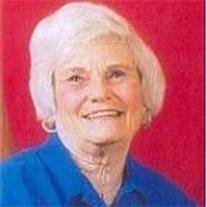 Dorothy M. Hartman (Lemmon) 83, of Kansas City MO, passed into the Lord?s hands on Sunday, September 21, at the Lee?s Summit Medical Center.
Dorothy was born December 15, 1924 in Hastings, Nebraska, oldest child of Jesse Elizabeth (Danfield) Lemmon and Clarence Dewey Lemmon. She grew up in York, NE, Denver, CO, Santa Ana, CA and attended high school in Grand Island, NE, where she graduated in 1943.
She was married to John W. Hartman on August 29, 1943. Dorothy and John recently celebrated their 65th wedding anniversary. They have made Kansas City their home for 57 years. To this union were born three children Robert and wife Lisa currently of San Diego, CA, James and wife Debra of Lenexa, KS and Judy Thone and husband William of Apple Valley, MN. She also leaves grandchildren Melissa and Brian Thone of Minnesota and step-grandchildren Joe Clark of Lenexa, KS, Gloria Young of Independence, MO and Daniel Youmans of San Diego, CA. In addition she welcomed great grandchild Kayla Clark.
Dorothy worked for many years for T.V. Guide distributors and the I.R.S., from which she retired in 1991. She started a Tuesday evening bridge group, which she enjoyed for 50 years. She also loved to play Canasta and followed Wheel of Fortune, Jeopardy and The Price is Right daily. Dorothy was an active member of The Community Christian Church 4600 Main St. Kansas City, MO.
In addition to immediate family, she leaves a brother Clarence Lemmon Jr. of Fort Wayne, IN, sister Lovie Thompson of Elbert , CO, their spouses, nieces, nephews their families, many many friends, co-workers, parishioners and neighbors, all of whom loved her and celebrate her life and love.
To order memorial trees or send flowers to the family in memory of Mrs. Dorothy Hartman, please visit our flower store.