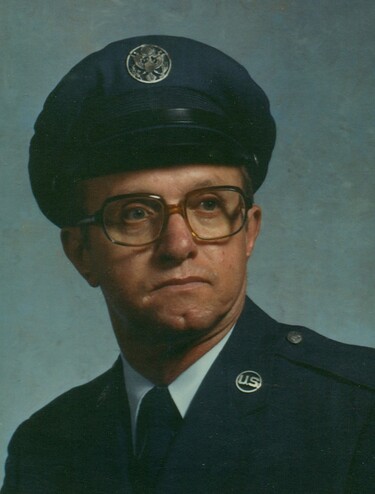 George Roy Elton Merryfield, 91, passed away peacefully February 16, 2022, at Saint Luke’s Hospice House in Kansas City, Missouri. He was born on February 22, 1930, in Utica, Missouri to Merl and Alta (Cosby) Merryfield. Shortly after graduating from Utica High School, Class of 1948, George enlisted in the United States Air force in 1950 serving until being honorably discharged in December 1954. After working for several aircraft companies, George decided to reenlist. He enjoyed his time in the Air Force, made many lifelong friends, and retired having reached the rank of Chief Master Sergeant, Supervisor of the Aircraft Generation Section with the 442nd Fighter Wing.

As a young airman, he met the love of his life, Helen Graves. They were married on March 24, 1951, at the First Baptist Church in Chillicothe, Missouri. George was a loyal member of the VFW, American Legion, Air Force Association, and the Air Force Sergeants Association.

After retirement, George worked with PepsiCo, earning Salesman of the Year. He devoted 17 years with the Grandview C-4 school district working at High Grove Elementary school where he made many cherished friends. He was admired by students and faculty alike for his caring spirit and dedication not only to his work but to helping the school succeed however he could.

In lieu of flowers memorial contributions may be made in his honor to the Utica Cemetery.

Services will be in the care of Longview Funeral Home 12700 SE Raytown Road, Kansas City Missouri, 64149. Visitation will be Monday, February 21, 2022, at 10am followed by the funeral at 11am. Graveside service will be at 2pm at the Utica cemetery in Utica, Missouri.

To order memorial trees or send flowers to the family in memory of George Merryfield, please visit our flower store.