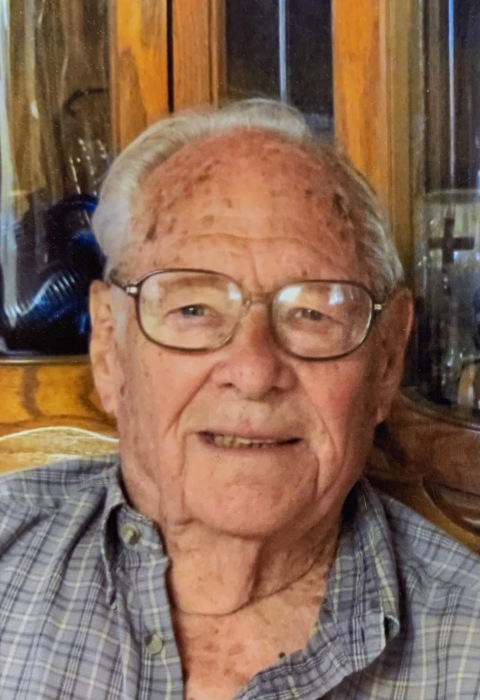 Harvey “Hoyl” Ray, devoted husband, loving father, grandfather, and brother left this world on August 12, 2021, at the age of 92.

Hoyl was born to Clint and Dollie (Palmer) Ray in Buffalo, Missouri on March 31, 1929. Growing-up in southern Missouri, he found many boyhood adventures (and a little mischief) in the nearby woods, rivers, and creeks. He recounted many of his childhood memories often for his children and grandchildren, but among the fondest of these were the times he spent with his grandfather, Jake Ray. After graduating from Buffalo High School in 1946, Hoyl moved to Kansas City and in 1948 joined Business Men’s Assurance Co., (BMA), where he would spend the entirety of his career, starting in the mail section of the services department and retiring in 1986 as the Manager of Annex Services. From 1951 until 1953 he served in the U.S. Army as a member of the Map Reproduction Topo Battalion.

It was during these early years in Kansas City that Hoyl was introduced to Thelma Huddleston, who would become his partner in life when they wed on December 8, 1951, in Bentonville, Arkansas. For 69 years, 8 months, and four days, they lived as a brilliant example of the love, patience, faithfulness, and constancy that defines an enduring union. They were loving parents to daughters Cynthia, Rebecca, and Lisa.

During his lifetime, Hoyl enjoyed a number of hobbies such as bowling, woodworking, fishing now and then, and alongside Thelma, planting and nurturing spectacular gardens at their Raytown home. Those who were fortunate recipients, treasure many of his wood-crafted clocks, plant stands, small toy wagons, and swords.

A man of faith, Hoyl demonstrated his character in his love for his wife, daughters, and grandchildren, but also in how he treated others. His children and grandchildren witnessed his sensitivity to the feelings of others, especially if he saw someone in need of some kindness and assurance. He would do anything he could when help was needed. A longtime member of Westport United Methodist Church, he was active in numerous ways, from serving as the Sunday School Superintendent, to ringing the Church bell prior to service then serving as an usher during service, to performing small maintenance projects around the Church.

In his final days, with his family around, though he could no longer communicate, we could hear him saying “You don’t need to rush off,” and so, we didn’t - we stayed. And while there we were blessed to hear Thelma join the nursing home’s music therapist in signing to Hoyl several of his favorites. This sparked memories of Hoyl and Thelma standing side-by-side after dinner, washing dishes – she washed and he dried, and the entire time, they sang – mostly hymns with a few 40’s classics thrown in. It was a home filled with music, stories, and laughter, but also many lessons - lessons of patience, honesty, decency, hard work, diligence, humility, and selflessness, all characteristics that defined the way Hoyl lived his life.

In lieu of flowers the family suggests contributions to Village Hospice Care, or a charity of your own choice.

A celebration of life will be held on Monday, August 23, 2021, with visitation beginning at 1:00pm and service following at 2:00pm.

To order memorial trees or send flowers to the family in memory of Harvey Ray, please visit our flower store.