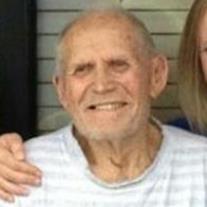 James Garland Braswell
James “Jim” Braswell, 88, of Lee’s Summit, MO, was reunited with his loving wife of 56 years, Juanita, on February 12, 2015. He was born March 18, 1926 to Fred and Mossie Braswell of McKinney, Texas. He served in the U.S. Army Air force in WWII after growing up in rural Texas. He moved to Missouri after meeting the love of his life, Juanita. He retired from Missouri Public Service Company where he worked as a lineman. After his family, his greatest love was fishing. He spent hours fishing with family, friends, and co-workers, and teaching his sons and grandchildren his hobby.
James was preceded in death by his parents, Fred and Mossie Braswell, brother, Winston, and loving wife, Juanita. He is survived by a brother, Ken (Sara) Braswell of Athens, Texas, son, Jim (Karen) Braswell of Drexel, MO, son, Gary (Janet) of Lee’s Summit, MO. He also leaves behind four grandchildren, Jami (Rick) Davis, Amanda (Geoff) Green, Brett (Tricia) Braswell, and Madison Eitzen-Carroll, and seven great-grandchildren, Caleb, Jenna, Ashley, Abi, and Connor Green and Wyatt and Waylon Braswell. He also leaves behind numerous nephews, nieces, in-laws and friends.
A kind, gentle and caring man who will be missed by many. Happy Valentine’s Day Mom and Dad, now truly together forever.

To order memorial trees or send flowers to the family in memory of James Braswell, please visit our flower store.