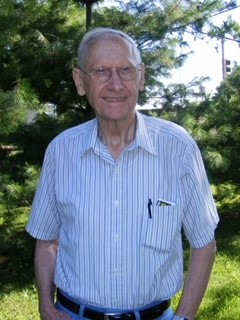 James Brock Fullerton Jr., 93, passed away December 19, 2022, surrounded by his daughters.  Funeral service and burial will be held at Longview Funeral Home and Cemetery Thursday December 29, 2022, at 2pm.  Memorial contributions in Jim’s name are suggested to the Parkinson’s Foundation or ADRA (Adventist Development and Relief) International.

Jim was born on July 23, 1929, in Jewell County, Kansas to James B. Fullerton and Vesta (Brock) Fullerton.  He grew up in Montrose, Kansas and graduated from Montrose High School in 1947. After High School Jim served in the United States Army during the Korean Conflict. Jim met his wife, Lesta Secrist, through his cousin at his baptism. Lesta was Jim’s Soulmate, and they were married on May 11, 1958.  They made their home in Kansas City, Kansas and had two daughters, Cynthia, and Cheryl; the family later moved to Raytown, Missouri.

Jim worked at Homelite Chainsaw for over 30 years before retiring from there in 1990. Later Jim would work at Shawnee Mission Medical Center for additional 10 years retiring officially at age 70. However, work always took a back seat to being a husband and a father. The girls in his life were everything to him and he would do anything for them.  He was a member of KC Central Seventh Day Adventist Church. During his time with the church, he was a deacon and always gave a helping hand where needed from mopping to fixing things around the church. Jim was never the type to relax he always was helping others or working on a project. He needed to keep busy.

Jim was preceded in death by his wife Lesta of 63 years who he cared for till her passing 2 years ago, His parents, stepmother Jaunita Fullerton, and two brothers, Albert, and Alfred Fullerton.  He is survived by his daughters, Cindy (Dennis) Whitson and Cheri (James) Boyles; grandchildren:  Thomas (Kendall) Finch, Sarah Whitson, Kirsten Boyles, and Nicholas Boyles; sister Janis (Skeeter) Howlett; and a sister-in-law, Frances Secrist. Jim will be greatly missed by many nieces, nephews and friends.

To order memorial trees or send flowers to the family in memory of James Fullerton, please visit our flower store.