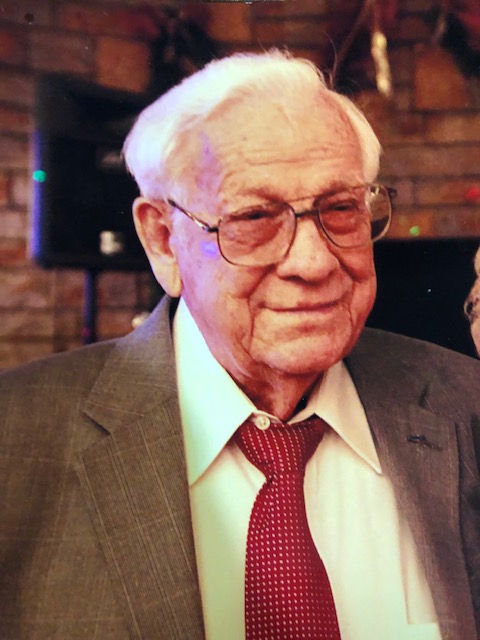 Don was born at home in Carthage, MO December 13, 1924 delivered by his grandmother, Martha Green. His parents, Cecil and Edith Meador, taught him the skills of farm life that he would use through his boyhood, molding him into the hard-working craftsman his friends and family knew him to be.

Known fondly as Don, he grew up to attend Blue Springs High School. He was considered one of the more popular boys, due in part to his participation in a variety of activities, due also in part to the fact that he was one of few students who had an automobile. His sophomore year he was half of a duo voted “Most Popular Couple.” He would go on to graduate in 1943.

On June 5, not long after graduation, he was inducted into the army. After finishing basic training, intelligence and reconnaissance, he spent a year in Europe with the 70th Infantry Division Trailblazers. Included in this time, he fought at the famous Battle of the Bulge. Through his efforts and hardships, he received the American Theater Ribbon, European African Middle Eastern Theater Ribbon, two bronze stars, Good Conduct, and World War II victory medals. He served until April of 1946.

Upon returning home after the war he met the apple of his eye, Donna Rose Patton on a blind date. They married November 11, 1946, and would go on to have four beautiful, intelligent, hard-working children.

Through this time, he built three houses in Blue Springs, MO with his Uncle Sam and their friends. Ever the craftsman, he would continue and build two more houses in Independence, MO, one with an in-ground pool!

True to his hard-working form, he would go on to attend school to be a telegrapher for the railroad, and later own a dry-cleaning store in Blue Springs, MO.  In 1950 he began at Pacific International Express (PIE) as a rate clerk, and later promoted to salesman. He held this position for 33 years until he retired in 1983. He grew restless, and later worked at Metro Auto to socialize and keep busy.

During this time, together with Donna Rose, he raised those 4 beautiful children, Cynthia Cross, Don Meador, Glenn Meador, and Scott Meador. Cindy grew to be a nurse, Donnie an engineer, Glenn a pharmacist, and Scott an automotive technician. He was proud of all of them.

It was in November of 2008, on Thanksgiving Day, he lost his love, Donna Rose. He would go on to say it was the worst day of his life. He spent his time dazed, and depressed until one day when the clouds started to clear.

He reconnected with his high school sweetheart, the other half of the duo known as “Most Popular Couple” at Blue Springs High, Nancy Lowe. She had also lost her husband, and through this bond, Don and Nancy’s friendship was renewed.

He came to life as they traveled together, and enjoyed each other's company for many years until her passing in late 2018. After her passing, their relationship was immortalized as a local television news station interviewed him about this rekindled love.

It is difficult to sum up the achievements of a man through almost 95 years of his life, but some of his more notable ones include the fact that he built his own airplane, the Piper Cherokee 180, he was a member of the Piper Flying Club, member of VFW Post #5789, in Lee’s Summit, MO, member of the Experimental Aircraft Association, Trailblazers 70th Infantry Association 274th, PFC, a minister for RLDS church, and an assistant scout master for the Mic-O-Say Tribe.

Known for being caring and respectful to anyone he met, he was proud of his family and wanted the best for everyone. He had a profound sense of humor, he will be greatly missed, and he will never be forgotten.

To order memorial trees or send flowers to the family in memory of James Meador, please visit our flower store.