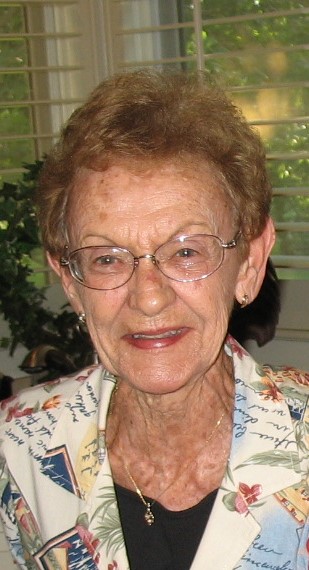 Joan, our new Angel, was born June 13, 1932 to Walter (Walt) and Madeline (Robinson) Wheeler, in Horton, MO.  She graduated from Nevada, MO High School in 1950, attended Southwest Missouri State College for two years, where she met and married Frank Green in 1953.

After graduation and marriage, Frank joined the Army and was stationed in France where Joan joined him.  They lived for a year in Donnezac, outside of Bordeaux.  Upon returning to the states, they moved to Manhattan, KS where Joan worked at the Kansas State University Student Union, as an administrator, before the arrival of Kelly and Kevin in 1956.  Keely was born in 1958 while Joan and Frank lived in Springfield, MO.  Kansas City became home for 53 years until 2012, when Frank and Joan moved to assisted living in Leawood.

Joan worked for Consolidated School District #1 (Hickman Mills) for 29 years.  She used her passion for kids and education as an elementary school secretary for 17 years. She later became an office administrator.  She loved interacting with her neighbors. She was an avid reader, knitter and sunbather.  She played badminton, tennis and any sport her kids and granddaughters wanted to play.

For over 60 years Joan was a Methodist. She had many friends at Country Club United Methodist, Grandview United Methodist and most recently Church of the Resurrection.  Helping others as a member of the knitting and crochet women’s groups along with other charitable organizations was part of her caring nature.

The joy of Joan’s life revolved around providing unconditional love to her kids, granddaughters and great grandkids.  She was there for virtually every recital, choir ceremony, cheerleading and sporting event or activity her children participated in.  Her smiles and cheering on the sideline, no matter how the game or event was going, was cherished by all of us.

A celebration of life is planned at Longview Funeral Home and Cemetery https://www.longviewfuneralhome.com/ on Saturday, March 14, 2020.  Visitation will begin at 10 am with a funeral service starting at 11 am.  A short grave side burial will follow.

Joan and the family would like to thank the many friends, caregivers, doctors, nurses and healthcare professionals that shared their hearts, knowledge and love throughout her life journey.

In lieu of flowers, the family asks that memorial contributions be made to KU Endowment, 3901 Rainbow Boulevard, Mail Stop 3012, Kansas City, KS 66160, to benefit Dr. Chris Lominska’s radiation oncology research. Online contributions may be made at www.kuendowment.org/give  Please indicate that donations are for the Joan Green Memorial.

To order memorial trees or send flowers to the family in memory of Joan Green, please visit our flower store.