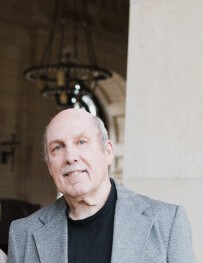 John Stuart Dell, beloved husband, father, and grandfather, went to be with the Lord on January 11, 2022. He was born on March 18,1949, in Sisseton, South Dakota, to Donald and Ida Dell. John was the youngest of three boys and would often recount having a fun childhood with his brothers and cousins. After graduating from Paullina (Iowa) High School in 1967, he continued his education and completed his bachelor’s degree at the University of South Dakota.

In 1972 he met Diane Allensworth, his future wife.  John was with Diane when he surrendered his life to Jesus Christ at a concert they attended. On June 14, 1975, John and Diane were married and began their long life together. John continued teaching high school English and Spanish as he and Diane started a family, having Israel, Michael, Sharon, and Sarah during the eighties. Later  John switched from teaching to caregiving for those with severe disabilities, an occupation he would hold until his retirement.

John never defined himself by his careers. In conversations, he identified himself as a follower of Jesus and a father. Christ was the light of his life, and he spent his spare time and money on family and the church. Retirement was a broadening of horizons for John. He and Diane were involved in houses of prayer and began traveling to support the prayer movement. Grandchildren started arriving to keep him busy as well. He often called himself a rich man for living so close to all his grandkids and found deep joy in what he called “enhanced grandparenting”. Loving God and family became the foundation of John and Diane's life and would continue up until the end of his life.

John is survived by his brothers and sisters-in-law, Robert and Sandra, and Richard and Corliss, both of his parents having passed in the early eighties.  Diane continues their life and family without John, along with their children Israel, Michael, Sharon, Sarah, son-in-law Peter Greenwood, and all their grandchildren ages sixteen years to seven months.  All of John's family will miss him terribly and continue to live by his and Diane's example, following the lead of Jesus Christ and looking to the age to come.

To order memorial trees or send flowers to the family in memory of John Dell, please visit our flower store.