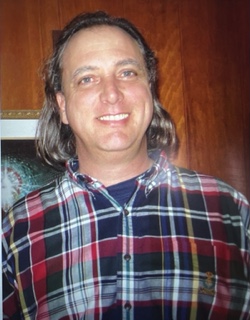 John David Luck was born in New Orleans, Louisiana on February 25, 1964. He lived in the Greater New Orleans area until moving to Kansas City, Missouri in 2008, where he lived until his death.

John graduated from St. Martin’s Episcopal School in Metairie, Louisiana in 1982, and received a Bachelor of Arts degree from the University of New Orleans in 1990.

John worked as a probation and parole officer for the Department of Corrections in New Orleans and in Kansas City. He had an uncommon level of compassion for his clients and a special ability to connect with them, understand their needs and help them improve their lives.

John deeply enjoyed reading, discussing spirituality, cooking food from many different cultures and eating it with friends, listening to good music of many genres, and exploring the wooded areas surrounding where he lived.

John was a committed follower of Jesus Christ. He loved his wife and sons faithfully and worked hard as the provider for the family for 25 years, allowing Lisa to fulfill their desire to homeschool their sons.

On Tuesday, December 28, 2021, John’s spirit passed from this earth into the presence of his Lord. He will be missed by many.

John will be buried at Longview Cemetery in Kansas City, Missouri in a private service.

John’s family would appreciate those who desire to make a memorial contribution in John’s honor to donate to hopecitykc.org, an organization whose mission it is to bring hope to people in need and help them rebuild their lives.

To order memorial trees or send flowers to the family in memory of John Luck, please visit our flower store.