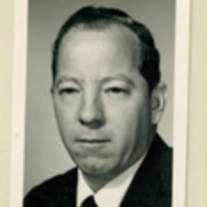 John was born October 6, 1932 in Kansas City, Missouri the son of Melvin Haskell Jr. and Laura Alta Stutzman.  He was a 1950 graduate of Center High School in Kansas City, MO.  He served in the U.S. Navy from 1951 to 1955 and served on the USS Coral Sea in the Korean War. He later attended the University of Missouri – Columbia achieving a degree in civil engineering in May 1962.

John was a professional civil engineer and worked for the Department of Energy for over 30 years at Bendix Corporation (later named AlliedSignal and presently Honeywell) in Kansas City.  He retired in 1992 after having served as a leader in many of the construction projects around the building’s complex.

He married Stella Louise (Anders) in 1959. In their early years they resided and raised their 4 children on 5 acres in Raymore, Missouri.  A place he and his family held many fond memories of.  After his retirement they settled on 20 acres in Garden City, Missouri. John routinely attended the Bethel Assembly of God Church in Garden City.

John’s life was full of achievement and love. He was a book worm and enjoyed reading books of all kinds but particularly ones about history; researching ancient Egypt was a special hobby of his.  He also was a great record keeper and writer.  He has left behind so many precious memories through his journals and was a true family historian. Many of his family and friends have stacks of letters he wrote to them throughout their life. His journals, letters to loved ones and his excellent documentation on photos contain many treasured memories and an abundance of his great wisdom. He loved to listen to classical music specifically Tchaikovsky. He enjoyed following sports especially golf, the Kansas City Chiefs and Royals. He liked to be outdoors and for many years of his retirement he spent his time wood working, vegetable and flower gardening and just “tinkering” around in his garage.  The legacy he left was one of hard work, patience, compassion and he truly embodied what it means to put your family first.
To order memorial trees or send flowers to the family in memory of John Stutzman I, please visit our flower store.