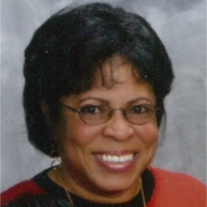 Joyceann Gresham-Hicks, born May 12, 1944 to the union of Tee and Mamie Johnson-Gresham who previously preceded her in death.  She was the youngest of six children, all of whom also preceded her in death: Tee Jr., Marvin, George, Jessie Mae, and Charlene, the oldest who passed in 2015.   She lived in Kansas City, Missouri all of her life.  She was the mother of two children, Gary Eugene Burns, Sr. and Kelley A. Hicks-Voss (Mark). and between the two, six grandchildren were born:  Eric, Briana, Michael; Gary Jr., and Gregory; and Ariel.  Joyceann also had an extended family involving her step-sons, Wesley (Lisa), children: Whitney and Leslie; Joe Hicks, Jr. (Virginia), sons Jordan, and Joshua, daughter Janese.

She graduated from Lincoln High School in 1962, and after graduation and working for a short period of time at Southwestern Bell Telephone Company, she began a long career at United Missouri Bank (UMB) where she worked for 36 years.  She and her friend Laura Boyd retired at the same time in March 2005.  Joyceann received several certificates of appreciation and awards for the service she provided to UMB.

She was a born-again Christian, who, like some Christians, at some point in life, stray from the church.  However, because of God’s mercy and grace, she returned to Him and five years ago, she rededicated her life t0 Jesus Christ at Grace Baptist Church.  While at Grace, through the teachings and preaching of Dr.  Aaron Lavender, she learned to love God’s Word.  She loved Sunday School and learning with other Christians.  While at home, she continued to study the Bible.  After her illness was diagnosed in 2013, and later after she began to weaken, she was discouraged because she could no longer attend church and share in studying with others.  However, her church family made sure that she received material each week to help her continue to study.  She also loved working in the church’s Food Pantry.

Joyceann was a dedicated person to whatever she committed to do, and whomever she was involved with.  She was a private person and had her customs which sometimes alienated people from her.  However, those who were around her knew that her heart was big and she would do anything to help anyone, anytime.

Joyceann was well liked and loved by many, and at St. Luke’s Hospital, the nurses called her and made her their ‘special patient.’  Her battle was long and trying but she endured it most of the way, quietly and alone.   She never complained and never used her sickness as an excuse not to participate in any family gatherings or getting together occasionally with her dear friends Laura Boyd and Betty Allen for lunch.  Since she was able to get around on her own for so long, others believed she was doing fine, which she was by the mercy and grace of God, and they felt she didn’t need nor did she want help.  Joyceann, being a little prideful, didn’t want help and never asked for help.  No matter how bad she felt, she would just keep on doing what she had to do and most always, got it done.

Joyceann will be missed tremendously by her devoted cousins, “The Hens”, Barbara Ann, Marcia, and Debra who misses those Friday “Hen’s Day” which always ended in Bible study.  Many others will miss her smile. Her family of nieces, nephews and cousins will truly miss her for her presence.  We all realize that each of us were blessed to have been a part of the life of a special lady.

She leaves to mourn her passing, her son Gary, her daughter Kelley (Mark), her grandchildren Eric, Briana, Michael; Gary, Jr and Gregory; and Ariel. A special niece, Renita (Michael) and nephews, H Herman ‘Chucky’ Boggess, Jr., Donnie Boggess, and Scott Boggess, and other nieces and nephews, along with many special cousins and many friends.
To order memorial trees or send flowers to the family in memory of Joyceann Hicks, please visit our flower store.