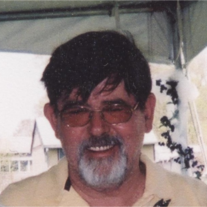 Larry E. Polson, 74, of Kansas City, MO passed away on February 3, 2016.
Larry was born on October 29, 1941 to Ellis and Rose Polson in Keokuk, Iowa. He served in the U.S. Air Force from 1960 – 1968. He worked for the city of Kansas City for over 30 years. Larry spent his entire life restoring and working on cars. He was a lifetime member of the American Legion Post 598 and a member of the VFW Post 8100.  Larry will be remembered for the number of friends he had and his acts of kindness to always provide assistance when needed.
He was preceded in death by his parents; his step-mom, Betty Polson; and his second wife, Mary Ann Neyens-Polson. Larry is survived by his wife, Marjiann; his children: Edica Liebl, Jesica (Jim) Burch, and Brenda (Mike) Fox; his step-children: Richard Webb, Jeffrey (Krissy) Webb, and Steven (Amber) Webb; his grandchildren: Cameron Liebl, Korin Liebl, Quinton Liebl, Carson Liebl, Nick Polson, Rose (Bobby) Bryan, CJ Wright, Michael (Alison) Miller, Laura (Patrick) Toomey, Joe Miller, Nathan Webb, Danielle Webb, and Cole Webb; 6 great-grandchildren; his brother-in-laws: Jack Neyens and Glen Briscoe; and many nieces, nephews and cousins.
A funeral service will be held on Tuesday, February 9, 2016 at 3:00 pm, with visitation one hour prior to services. Inurnment will be at a later date. Memorial donations are suggested to the VFW or American Legion.
To order memorial trees or send flowers to the family in memory of Larry Polson, please visit our flower store.