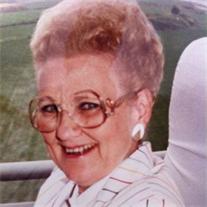 Lila Mae Masters Epley 08-02-24 - 04-23-11
Lila passed away peacefully at home in Raymore due to natural causes. She was born August 2, 1924 in Des Moines, Iowa to Charles and Cora Masters. She was proceeded in death by her parents, brother, sister, husband Kenneth, daughters Claudette and Emily, and two grand children, Brian and Kimberlee.
Lila is survived by daughter Diana Thomas, husband Roy of Belton. Vicki Thomas, grand-daughter of the home, Steve Thomas of Kansas City, MO. Chad & Alison Woodburn of Detroit, MI. Darlene & Craig Morgan of Scottsbluff, NE. Cindy Morgan of Des Moines, IA. and Keith & Sydney Woodburn of Germany. Also 6 great-grand children and 4 Great-Great Grandchildren. Plus countless friends.
At an early age, Lila developed Rheumatic Fever which left her with a life long heart problem. She attended Smouse Schol for the handicaped until she entered North High School.
During WWII, Lila worked as a teletype operator in Chicago and San Fransico. She continued to live in Des Moines with the love of her life, Husband Kenneth I Epley, and raised two daughters, Diana and Claudette. Along with adopted daughter Emily. In 1965 they moved to Kansas City, MO. Lila went to work at Bendix, were she retired from in 1989.
Upon retiring, she caught the travel bug. She traveled all over the USA and Canada. She ventured to Europe, Korea, Australia, Ireland, and New Zealand. She was always ready to try anything: rafting, hot-air ballooning, swamp adventures in Louisiana, or whatever her beloved daughters thought of.
She was an active member of Keystone #25 Order of True Kindred for 39yrs. She was also a member of Grandview #365 Order of Eastern Star for 68yrs.
Lila never met a stranger, she could talk to anyone and they were an instant friend. All who met her immediately loved her.
A special thanks and God Bless to the fantastic people from Vitas Hospice: Marty, Kattie, Ron and Roger. You were a blessing to Lila in her final days.
In lieu of flowers, please contribute to the Lila Epley memorial fund at UMB Raymore bank or the charitable organization of your choice. Funeral services will be held 10 a.m. Wednesday, April 27 at Newcomer’s Longview Funeral Home and Cemetery, with burial immediately following at Longview Memorial Gardens. Visitation Tuesday, April 26 from 6-8 p.m. at the funeral home. (Arr. Newcomer’s Longview Funeral Home, 12700 S. Raytown Rd. Kc. Mo. 816-761-6272)
To order memorial trees or send flowers to the family in memory of Lila Masters Epley, please visit our flower store.