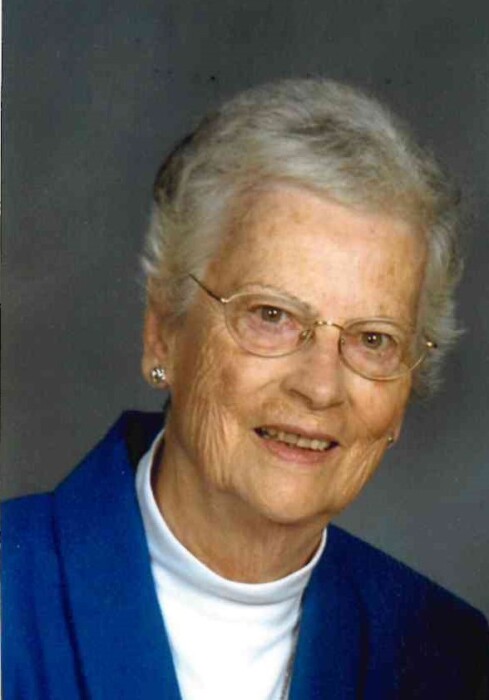 Lorna was raised in New York and graduated from Wellsville High School in 1949. She then attended Cornell University, earning a bachelor’s degree in Home Economics in 1953. After graduation she worked as a 4-H Extension Agent before marrying her college sweetheart John “Jack” Mowatt on July 2, 1955. After her marriage Lorna was a supportive Air Force wife and homemaker for 20 years while traveling the world with Jack as his stations moved, settling in Lee’s Summit upon his retirement from the service.

During Jack and Lorna’s 62 years of marriage they were blessed with 4 children: Beth, Larry, Joel, and Ellen. Lorna used her home economic skills to build a beautiful home for her family. Lorna loved to cook and bake, sew, cross stitch, garden, and make homemade ornaments every year for Christmas. She looked forward to watching figure skating on television during the winter and doted on her beautiful houseplants and African violets.  She enjoyed baking for her grandchildren when they were young and teaching them how to sew and craft.  In her later years, she treasured seeing pictures of her great-grandchildren in daily emails.

Lorna was a longtime member of the United Methodist Church of Lee’s Summit, participating in the Bell Choir, and belonging to the UMW women’s group where she coordinated funeral dinners for many years. She was also a charter member and past president of the GFWC Study Club. Lorna was always very active in her church and in sharing her love for Jesus Christ.

In 2000, Lorna was the recipient of a kidney transplant through posthumous donation.  She remained extremely grateful for the gift of life she received and was a strong advocate for organ donation.

Lorna is preceded in death by her parents Lyle G. Stout and Edith Francisco Stout, her husband of 62 years John “Jack” Mowatt, her 6 older siblings and her grandson Ryan Mowatt.

Lorna is survived by her children Beth (Russ) McKinney, Larry (Donna) Mowatt, Joel (Joyce) Mowatt, and Ellen (Jerry) Donovan, her brother Galen Stout, and 11 grandchildren and 10 great-grandchildren. Lorna will be truly missed by many other extended family and friends.

Services for Lorna will be held at Longview Funeral Home and Cemetery, Friday November 19, 2021. Visitation will be at 10 am with Funeral and burial to follow starting at 11 am.

In lieu of flowers, memorial contributions can be made in Lorna’s honor to UMCOR or the National Kidney Foundation.

To order memorial trees or send flowers to the family in memory of Lorna Mowatt, please visit our flower store.