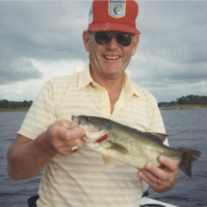 Mr. Heimsoth was born November 4, 1931 into the home of Mr. and Mrs. Eric R. Heimsoth and
Johanna L. Harms in Lake Creek, Benton County, Missouri. Mr. Melvin W. Heimsoth and Miss Betty J. Eagar were united in marriage on December 16, 1955. They were blessed with three children.

Mr. Heimsoth served in the United States Army from 1953 through 1954. During his service, he was stationed in the U.S. and Germany. After his service and marriage, Mr. Heimsoth worked as a dairy farmer for several years. Later, he was employed by General Motors until his retirement. After retirement, he kept busy working in security for Adesa located in Lee’s Summit.

Melvin was an active member in his church at St. Matthew Lutheran Church of Lee’s Summit, Missouri.  A gracious and kind gentleman, Melvin loved meeting new people and visiting with family and friends. He loved gardening, woodworking, reading, fishing and NASCAR Racing.

Funeral services will be held at Longview Funeral Home (12700 S. Raytown Rd., KCMO) on Friday, June 3, at 10 a.m., with a visitation on Thursday, June 2, from 6-8 p.m. Interment will follow at Floral Hills East Memorial Garden, (25203 E. US Hwy 50, Lee’s Summit, MO).
Donations may be made in memory of Melvin W. Heimsoth to: The Village at Carroll Park, 5301 Harry Truman Drive, Grandview, Missouri  64030.
To order memorial trees or send flowers to the family in memory of Melvin Heimsoth, please visit our flower store.