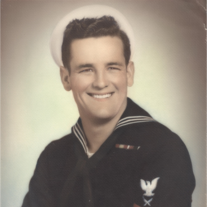 Melvin Dean Reeder passed away February 3, 2017 at the age of 83 years, 5 months.
He was born on Aug. 25, 1933 in Trego County, Kansas to Cecil and Emma Reeder. He was the 3rd born of 4 sons and 2 daughters.
Mel grew up on the farm in WaKeeney, Kansas. He went to a small country grade school, and then to Trego High School. He ran track, where he was captain 1 year. He played the cornet all four years. In 1953, Mel joined the Navy. He served 4 years, 2 years on a ship and 2 years on a submarine. In the Navy, he player cornet in the Navy band.
He married Elaine (Jacobs) in 1959. They lived for a time in Casper, Wyoming. To this union, 3 children were born: Kimberly, David, and Karen. Mel attended Fort Hays State University. He graduated with a degree in Accounting. He worked in sales and moved to the Overland Park area. In 1971, he married Glennie Bradley. This marriage gave him 3 step-children: Christina, Kevin, and Kimberly Bradley. They celebrated their 45th wedding anniversary on December 3, 2016.
The family moved to Clinton, MO in 1978 and opened Bumper to Bumper parts store. In 1986, they moved to Lee’s Summit, MO and Mel worked for EBE in Kansas City. The final move was to Independence, MO in 1993, and Mel was still in sales. He was a member of Christ United Methodist Church on 39th St. in Independence, MO. Football, golf, crossword puzzles and his dog, Nellie, were his favorite things. In 1987, the grandchildren started adding to the family, ending with 16: 10 Grandsons and 6 Granddaughters.
Mel’s health started to fail in 2005, when he had heart surgery. In 2011, he had hip replacement and in 2014, he had a stroke. He was in Centerpoint Hospital for 10 days with pneumonia until he passed away.
A visitation will be held on Monday, February 6th from 11:00 am – 12:00 pm, with a funeral service beginning at 12:00 pm at Longview Funeral Home, 12700 S Raytown Rd, KCMO. Interment will follow in Longview Cemetery. Memorial contributions are suggested to Westie Rescue of MO, http://www.westierescueofmissouri.com/ or to Furry Kids Refuge, P.O. Box 1442, Lee’s Summit, MO 64063.
To order memorial trees or send flowers to the family in memory of Melvin Reeder, please visit our flower store.