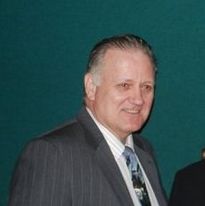 Mr. Michael Edward Roos was born on January 4, 1959 to Jim and Martha Roos in Kansas City, Missouri. Michael passed on to eternal life on May 14th, 2021 at the age of 62. He was a proud Kansas City native, having been born, raised, and lived his whole life in the area.

He attended St. Catherine of Siena Catholic Grade school in Kansas City Missouri, and then went on to graduate from Archbishop O’Hara High School. He then graduated from Central Missouri State University with a Bachelor of Science in Criminal Justice and Law Enforcement Administration, where he was an active and awarded member of Lambda Alpha Epsilon Fraternity and Association for American Criminal Justice. He then served as the head Security Supervisor for the National Headquarters of the Veterans of Foreign Wars nonprofit Organization for over thirty years.

Mike was proud to have earned his Eagle Scout award as a member of Troop 631. Mike appreciated all the leaders who mentored him in his scouting career. He in turn was a scout and cub scout leader for many years. He was also a member of the Tribe of Mic-O-Say, under the family name of Least Busy Quail. He spent many summers on staff at H. Roe Bartle Scout camp, serving as the Director of Conservation Lodge and the Rifle Range. After serving on staff, he went on to become a member of the Tribal Council as a Sachem in the Tribe of Mic-O-Say.

Mike was a devoted Catholic who enjoyed spending his free time at the family lake house at lake Pomme de Terre, he enjoyed fishing with his dad and Godchildren, targeting shooting at Pioneer Gun Club, reading books on military and American history, taking care of his loyal hound Heidi, and spoiling his Godchildren.

He was preceded in death by his grandparents Ed and Esther Roos, and Ed and Helen Hegarty. He was survived by his parents, Jim and Martha Roos, his sister and brother-in-law Mark and Patti Mejia, his Godchildren Alex and Arcadia Mejia, and his beloved dog Heidi.

The family would like to thank the nurses at St. Luke's hospital on the Plaza and everyone at Kansas City Hospice that provided such care and comfort to Mike.

To order memorial trees or send flowers to the family in memory of Michael Roos, please visit our flower store.