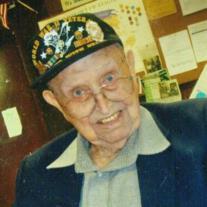 Omer Jefferson “Jeff” Embree, 91, of Grandview, MO passed away on December 4, 2015 at Kansas City Hospice House.
Jeff was born on May 1, 1924 to Perry and Beulah (Bullard) Embree near Knob Noster, MO. He served in the US Army for three years during WWII. He retired from the MO Highway Dept as their maintenance foreman. He was an active member of VFW Post 8100 in Grandview, where he served as Commander and a member of American Legion Zack Wheat Post 624 in Sunrise Beach. Jeff loved hunting, fishing, and dancing. He was known for his story-telling.
He was preceded in death by his first wife, Mary Ruth Jeffries in 1966; his step-son, Richard Ashford; and his siblings: Opal Hilt, Ruby Henderson, Harvey Embree, Helen Oswald, and twin brother, Homer “Mutt” Embree. He is survived by his wife of 45 years, Virginia “Jenny” (Burns) Ashford Embree; his sister, Dorothy Galloway; his brother, Dale Embree; daughter-in-law, Susan Ashford; step-grandsons, Brian Ashford and Shawn Wilson; step-granddaughter, Gina McKenzie; 7 step-great-grandchildren; and many nieces and nephews.
A funeral service will be held on Tuesday, December 8th at 11:00 am at Longview Funeral Home in Kansas City, MO, with a visitation one hour prior to service. Interment will follow in Longview Cemetery. Memorial donations are suggested to VFW Post 8100 or KC Hospice House.
To order memorial trees or send flowers to the family in memory of Omer Embree, please visit our flower store.