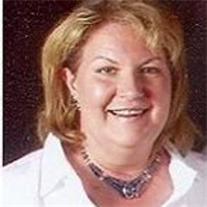 Pamela C. Julian (Rhoads), 47 passed away on September 17th in her home surrounded by her family and friends. She is preceded in death by her father, Al Rhoads. She is survived by her husband, Mark of Blue Springs, two sons, Jason and Jeffrey, both of the home; her mother, Elaine Rhoads, Lee?s Summit; a sister, Rhonda Morris, Lee?s Summit; a nephew, Christopher Morris and a niece, Amanda Morris.
Pam was a 1979 graduate of Truman High School in Independence, 1985 graduate of William Jewel College with a Bachelor?s Degree of Science in Nursing. Pam?s early nursing career was spent at Children?s Mercy Hospital in the Neonatal Intensive Care Unit. She received a certificate degree as a Neonatal Nurse Practitioner from West Virginia University in 1991. She spent the majority of her career as a Neonatal Nurse Practitioner at Research Medical Center and Medical Center of Independence in the Neonatal Intensive Care Unit. Pam was currently employed at Lee?s Summit Medical Center. She was very enthusiastic about her new position in their Neonatal Intensive Care Unit. Pam played an important role in developing the nursery.
Pam enjoyed spending time with her husband and sons, going to the boys sporting events and having fun with friends at the lake, she loved traveling to the Smokey Mountains with her mother and heading West to enjoy the scenery and wildlife of the Grand Tetons, Jackson Hole and Yellowstone.
To order memorial trees or send flowers to the family in memory of Mrs. Pamela Julian, please visit our flower store.