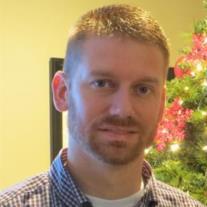 Phillip William Parks, age 40, passed away peacefully, Monday, May 18, 2015 at St. Luke’s East Hospital in Lee’s Summit, MO.
Phillip was diagnosed with Stage 4 metastatic melanoma in November 2014. Phillip, along with his family and friends, fought the disease for six months. He leaves his wife, Jennifer, and their daughters, Sydney and Olivia of the home; and his Father-in-law, Allen Smith and Mother-in-law, Sylvia Smith.
Phillip was born and raised in Clinton, MO.  As a young teen, he attained the Eagle Scout award and excelled in many sports during his school years. He was an amazing runner and continued to run in many 5K, 10K, and half marathon races that helped to raise money for many special causes.
Phillip joined the Navy after high school and later obtained his college degree. He was employed by Sprint as a Program Manager for almost 10 years.
Phillip and Jennifer were married on September 23, 2000. He was a loving husband and his daughters were his pride and joy. Phillip coached many of the girls’ soccer and softball games and he loved watching action movies with them. He relished family vacations, especially taking his beloved jeep rock climbing in Colorado with his family and friends. He never missed an opportunity to camp with his cousins and friends and truly enjoyed the outdoors and tried to hunt as often as he could. He cherished time spent with his neighbors around the bonfire as well as many neighborhood activities. He was an avid Mizzou and Royals fan and attended many of the games.
Phillip will be dearly missed by all those who knew him, but especially by Jennifer and his beautiful girls.
Donations can be made in Phillip’s honor to:
Melanoma International Foundation
250 Mapleflower Road
Glenmoore, PA 19343
www.melanomainternational.org
To order memorial trees or send flowers to the family in memory of Phillip Parks, please visit our flower store.