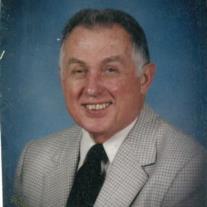 Beloved husband, father, grandfather, brother, and friend, Raymond V. Jones, passed away peacefully and in the Lord’s care, October 6, 2015. He was born November 21, 1932 in Kansas City, Missouri to Hoolie & Fern (Wilson) Jones/Sengstake. Ray graduated from Paseo High School in 1951. Ray served in the US Navy during the Korean War, 1952-53, decorated with 4 ribbons, 3 engagement stars, the Korean War Commemorative Medal, and Korean War emblem. He was a member of the Korean War Veterans Association, Chapter 2. Ray worked for Reeves Wiedeman Plumbing and Heating Company, retiring after 30 years. He didn’t like being retired and began working part-time for American Pipe and Supply Company for 14 years, until they closed in 2010. He was a generous man and great provider for his family.

Ray became a Christian in 1957 and was proud to be a Christian and gave a helping hand where ever needed. He was an active member of the former Ruskin Heights Baptist Church for 42 years, active teaching the boy’s Sunday school class, and serving as a Deacon and usher. Ray and wife, Katheryn “Kay” joined Grace Point Baptist Church in 2004, then moved to Raymore, MO and joined the First Baptist Church of Raymore, MO in 2015.

Memorial service will be held on October 12, 2015 at 11:30 am, with visitation being from 10:00 – 11:30am at Longview Funeral Home, Kansas City, MO. Graveside service will follow at Longview Cemetery with military honors.
To order memorial trees or send flowers to the family in memory of Raymond Jones, please visit our flower store.