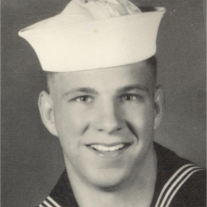 Richard D. Bledsoe, 78, of Kansas City passed away July 8, 2016.
Richard was born in Butler, MO on Aug. 12, 1937 to Elmer and Thelma Bledsoe. Richard married Wanda Douglas on Dec. 18, 1959 and they have enjoyed almost 56 years together. He proudly served his country in the Navy from 1955 – 1957. Richard worked for 27 years for Owen’s Corning Fiberglass, then retired from the Plumber and Pipefitters Training Center (PPTC). He enjoyed gardening and fishing. Richard was a member of the Belton Church of Christ. He will be remembered for being a family man and his love for his grandchildren.
Richard was preceded in death by his parents. He is survived by his wife, Wanda; his sister, Doris Jean (Charlie) Watley of San Antonio, TX; his children: Gary (Robin) Bledsoe of Blue Springs, MO; Roger (Gloria) Bledsoe of Smithville, MO; and Theresa (Chris) Lauver of Overland Park, KS; his grandchildren: Patrick (Sarah) Bledsoe, Betsy Bledsoe, James Bledsoe, Joseph Bledsoe, Ashley Lauver, Megan Lauver, and Allison Lauver; and his great-grandchildren: Julia and Olivia Bledsoe.
A funeral service will be held on Tuesday, July 12th at 2:00 pm at Longview Funeral Home, 12700 S Raytown Rd, Kansas City, MO, with a visitation beginning at 1:00 pm. Interment will follow in Longview Cemetery. Memorial contributions are suggested to Juvenile Diabetes Research Foundation (JDRF) or American Lung Association.
To order memorial trees or send flowers to the family in memory of Richard Bledsoe, please visit our flower store.