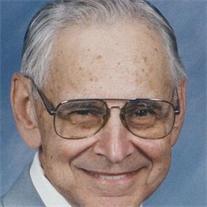 Robert Owen Wertenberger, 90, of the Foxwood Springs Living Center in Raymore, Missouri, died Tuesday, November 27, 2013, at Foxwood Springs Health Center. He was also under the care of Crossroads Hospice.
He was born March 14, 1923, in Marysville, Kansas, to the late Fred E. and Berneice M. (Quinn) Wertenberger. He attended Washington High School (Kansas) graduating in 1941. He received his Bachelor's Degree in Civil Engineering from Kansas State University, then entered the Army serving in the Corps of Engineers. While serving in Wichita, Kansas, he met Mary Ruth Young whom he married on April 21, 1946. Bob received his Master's Degree from Kansas State in 1952. He worked on various dams and reservoir projects for Wilson Engineering in Salina, Kansas, for ten years. He then returned to the Corps of Engineers in Kansas City, then Omaha, Nebraska. During their 50 years of marriage, Bob and Mary Ruth lived in Kansas, Nebraska, Colorado, and Missouri.
After Bob's retirement from the Corps of Engineers in 1983, they moved from Omaha to Warsaw, MO, and traveled in the southern states during the winter doing volunteer work for Wycliffe Associates (supporting Wyclife Bible Translators). While in Warsaw, they built an earth-covered Terra Dome house and helped start Twin Lakes Hospice. After Mary Ruth's homegoing in 1996, Bob moved to Foxwood Springs and met Esther Wright. They were married on May 24, 1997, and continued the practice of traveling south to do volunteer work in the winter.
Besides his parents and first wife, Mary Ruth, Bob was preceded in death by his sons, David Lee and Stanley Kay Wertenberger.
He leaves to mourn his passing: his wife, Esther (Huffman Wright) Wertenberger, of Raymore, Missouri; his two sisters: Jo Ann Montgomery of Urbandale, Iowa, and Margery Kadi of Plano, Texas; son Roger Wertenberger (Cheryl) of Holdrege, Nebraska; daughter-in-law Sandy Wertenberger, of Lees Summit, Missouri; step-children: Julie (Tom) Pitzenberger of Colorado Springs, CO, and Tony Wright of Independence, MO; 4 grandchildren: David Wertenberger, Traci McKibbin, Jared Wertenberger (Amy), and Kara Stevenson; seven step-grandchildren, eleven great-grandchildren, ten step-great-grandchildren; one great-great-grandchild and a host of other relatives and friends.

Contributions are suggested in lieu of flowers to Heifer Project, Wycliffe Associates, or Raymore Christian Church.
To order memorial trees or send flowers to the family in memory of Mr. Robert Wertenberger, please visit our flower store.