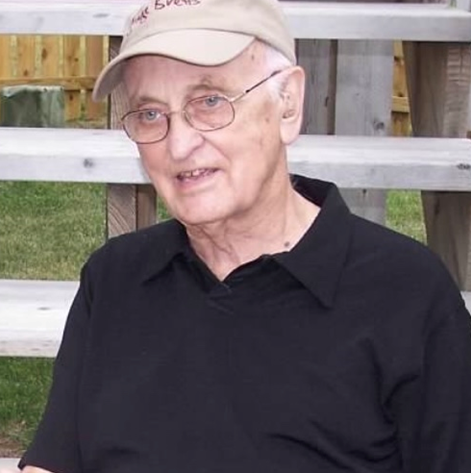 Bob was born June 14th, 1921 in Lawton, OK to Floyd and Gay Tice.  He was the youngest of their three children.  In 1939, Bob graduated from Lawton High School and then studied at Cameron University in Lawton.

During World War II, Bob proudly served in the United States Army for three years and left the military with the rank of sergeant. A talented drummer, Bob played in dance and swing bands before and after his military service up until the 1950s. Into his 90s, Bob was known to accept any invitation to join the band for a number or two while on vacation or at any social gathering.

While working at a shoe store in 1956, Bob met Barbara Jo Francis and secretly wrote down her phone number from the check she used to make a purchase. They married in 1957 and made a home in San Antonio, TX. In 1960, Bob and Barbara welcomed their first son, Robert. Beginning in the late 1950s, Bob began a career at Montgomery Ward, where he served as a beloved manager for over 25 years.  In 1966, he accepted a promotion that brought him and his family to Independence, MO.  In 1968, Barbara gave birth to their second son, David.

In 1971, Bob and Barbara bought an historic home in Independence that was in poor condition and started a restoration of the house that lasted until they moved in 1987. To furnish it, they started buying antique furniture at estate sales and auctions and eventually this grew into a business of buying antiques and then selling them out of an old carriage barn that was on their property. Like his father, deep into his ninth decade Bob scouted bargains on antiques, and resold them as a hobby and for a little profit at booths he kept at antique malls.

Throughout the latter part of his life, he enjoyed travelling with Barbara and spending time with his grandchildren. Bob was known for his sense of humor and was always in demand to entertain at family events with his joke-telling. Bob was a long standing member of Christ United Methodist Church in Independence.  With much gratitude, Bob celebrated his 100th birthday this summer with a party attended by many family members and friends. Bob was known for his zest and love for life.  He loved to socialize and enjoyed being with others. Only two weeks prior to his death, he was still attending Zumba classes at the independent living facility where he resided.

He is survived by his two children Robert and David, daughters-in-law Miluska and Kimberly, grandchildren Jacob and Emma, and numerous nephews, nieces, grandnephews and grandnieces, cousins and friends. He is preceded in death by his wife of 64 years Barbara, who passed away two months ago, as well as his parents Floyd and Gay Tice, sister Doris McCrary and brother-in-law Tom McCrary, and brother Charles Tice and sister-in-law Helen Tice.

There will be a visitation on Saturday, October 2nd, at 1 PM at Longview Funeral Home with a service to follow at 2 PM.

To order memorial trees or send flowers to the family in memory of Robert "Bob" Tice, please visit our flower store.