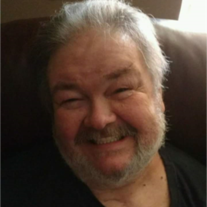 Ronald D. Hill, 62, of Kansas City, passed away on Sunday, February 5, 2017.
Ronald was born on May 23, 1954 to Robert and Nida Hill. Ronald will be remembered for being a hard worker and a loving father, grandfather, and brother. Most memories include his time spent enjoying his grandchildren, and the variety of activities they did together. He was an avid fan of the Chiefs, Royals, and Nascar. As a pastime, he had a love for gardening, which was shared with his family. He also enjoyed the time spent at the lake with his brother, Mike, and the rest of the family.
Ronald was preceded in death by his parents. He is survived by his daughter, Elaine Wooten and husband, James; his son, Jeremy Hill and wife, Liz; his daughter, Nerissa Hill; his daughter, Rachel Hill; his daughter, Rebecca Hill; 18 grandchildren; and his brother, Mike Hill and wife, Jo.
A memorial service will be held on Friday, February 10th at 3:00 pm at Longview Funeral Home, 12700 S Raytown Rd, KCMO. Inurnment will be at a later date. Memorial contributions are suggested to American Diabetes Association.
To order memorial trees or send flowers to the family in memory of Ronald Hill, please visit our flower store.