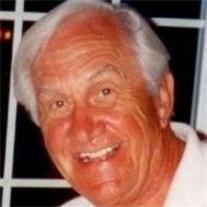 Ronald Gene Thomas, age 78, of Lee’s Summit passed away at Lee’s Summit Medical Center on Monday, January 4, 2010 after a cardiac arrest at his home. Born in Nevada, Missouri on June 6, 1931, Gene spent most of his life in the Kansas City area.
He graduated from Paseo High School in 1949 after which he joined the United States Coast Guard where he served for three years. Under the G.I. bill, Gene received a Bachelors Degree in Business at the University of Kansas, graduating in 1958.
Gene married his beloved wife, Shirley A. Wondraska, on February 6, 1954. He spent his career in the feed industry with emphasis on agricultural feed flavors. In 1987, he and Shirley formed Crest Flavor Company and in 1992 they built their manufacturing facility in Grandview to serve the growing customer base. In 1999, the plant’s capacity was doubled.
Gene was a member of the American Feed Industry Association and the Wild Bird Feeding Industry. He was involved with an investment group—Baltimore Investors and a weekly post-exercise men’s group-- “The Senate”. Civic involvement included the Raintree Lake Property Owners Association where he served on the Architectural Review Board and several other committees.
Gene and Shirley enjoyed travel all over the United States with special focus on trips to the West and Southwest to collect Indian artifacts. He maintained close ties to the Spencer Museum of Art at the University of Kansas. Taking a break from Midwest winters could find the couple scuba diving in the Cayman Islands or St. Barth, enjoying sailing in Belize, or taking a train excursion across Mexico. They also enjoyed cruises in Alaska, Spain, the Inland Sea of Japan, and the Rhine River in Germany.
Gene loved sailing with Shirley on their boat, Gemini, at Lake Jacomo. He was a golfer as well as a jazz aficionado.
He was known both personally and professionally as a man of great integrity. His humility was legend and he was respected for his determination, dependability, and straightforward style.
Gene was preceded in death by his parents, Bessie Sewell Thomas and Archie Thomas; twin brother Robert Dean Thomas; brother Richard Reid Koch, Jr.; and niece Stephanie Thomas Gaetke.
Survivors include his wife, Shirley, of the home; sisters Patricia Koch and Joanne Saathoff; sister-in-laws Hazel Thomas, Pat Deeter, and Paula Houston Koch; three nephews and two nieces; and best friend and business associate Bill Barr.
A Visitation at noon followed by A Celebration of Life Service at 1:00 p.m. will be held on Saturday, January 9, 2010 at Longview Funeral Home and Cemetery, 12700 S. Raytown Road, Kansas City. Lee’s Summit Mayor Karen Messerli will present a proclamation honoring Gene’s community involvement. A Celebration of Life Reception will be held after the service at the Raintree Lake Clubhouse, 825 SW Raintree Drive, Lee’s Summit.
In lieu of flowers, the family suggests donations to the Haskell Foundation, 155 Indian Avenue, Lawrence, KS 66046; the Kansas City Art Institute Advancements Department Scholarship, 4415 Warwick Boulevard, KCMO 64lll; or the KU Endowment Association % Pam Smith, 1891 Constant Avenue, Lawrence, KS 66044.
Arr: D.W. Newcomer’s Longview Funeral Home
To order memorial trees or send flowers to the family in memory of Mr. Ronald Thomas, please visit our flower store.