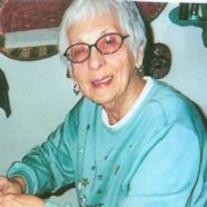 Ruby Fern Bishop (Anderson), 90, of Kansas City, MO passed away on December 28, 2014. She was born at Jerico Springs, MO on December 3, 1924 to Arthur Clifford Bishop and Maud Marie Cole (Bishop). She had one sister who died at birth. She attended Jerico Springs Schools for 12 years then after graduation, she moved to Kansas City, MO where she worked for the Federal Government for 38 years, retiring on April 29, 1983 from Richard-Gebaur AFB. Ruby was married to Lee Roy Anderson on 31 December 1945, two children were born to this union, Vicki Lee Anderson (husband, Arturo Delgado) and Sandra Kay Anderson.
Those left to cherish Ruby’s memory include her two daughters, grandson, Arturo Rafael Delgado, and 2 great grandsons, Grant Lee Delgado and Calvin Alexander Delgado who affectionately referred to her as G.G.
Visitation will be Monday, January 5, 2015 from 9-10 AM with a service to follow at 10 AM at Longview Funeral Home. Burial in Anna Edna Cemetery, Cedar County, MO at approximately 1:00 PM Graveside.

To order memorial trees or send flowers to the family in memory of Ruby Bishop, please visit our flower store.