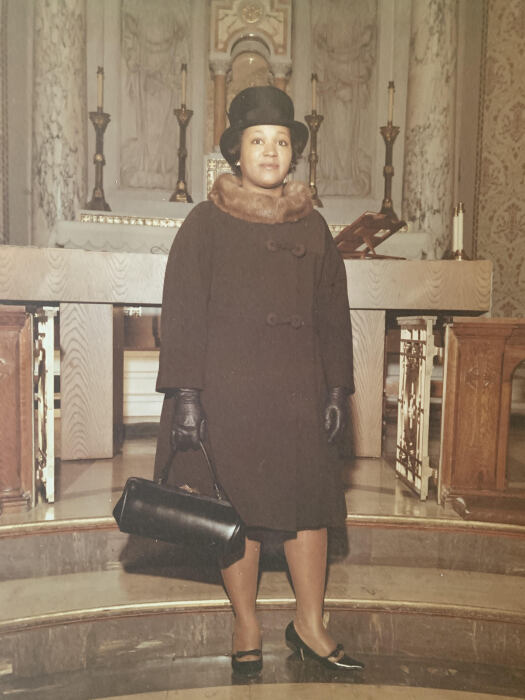 Ruby Inez Weaver was born at home in Kansas City, MO on December 6, 1926 to the union of Fannie Truelove Williamson and Arthur Wiley Williamson. She had one sibling, Arthur Eddie Williamson.

Ruby accepted Christ at a young age. She was a long-time member of Blessed Sacrament Catholic Church and later in life became a member of Palestine Missionary Baptist Church for over 35 years.

Ruby received her education at R.T. Coles and Lincoln High School in Kansas City, MO and Holy Epiphany in Leavenworth, KS.  After graduating high school, she continued her education at the Historically Black College- Lincoln University in Jefferson City, MO.

June 19, 1946 she was united in matrimony with George Allen Weaver, Jr., in Leavenworth, KS. In March of 1948 they moved to Kansas City, MO.  To this union, five children were born:    DeAnne, C’ Elaine, George, Arthur, and Patricia.

Ruby was a devoted and hardworking mother. She raised her children in a warm Christian home. She believed in a Christian education, working hard to send all of her children to private Christian schools from elementary through high school.

She retired from the United States Postal Service in 1986 with 28 years of service. During her service at the USPS, she was crowned Queen of the Postal Alliance.  She was also active in the local branch of the NAACP, where she was a life-time member.

Ruby lived her life with dignity, love, respect and integrity. She instilled these same values in her children, grandchildren, co-workers and friends.

She was a competitive person who loved playing canasta, pinochle, bid whist, Skip-Bo, dominoes and board games. She was a fierce competitor who rarely lost a game. She was a member of “The Royal 8” Social Club, a tight-knit group of friends who supported each other through many happy and sad times in life. As their children grew up and started their own families, “The Royal 8” were able to continue to enjoy each other’s company through traveling, baking, canning, cooking and playing cards. Ruby was the last surviving member of the “The Royal 8.”

If you knew Ruby you knew she was a HUGE Chiefs fan! She held season tickets for well over 20 years. Every Sunday during football season she was either at the game or in front of the television, watching the game. Family and friends knew not to disturb her on Football Sunday. She also hosted an infamous Super Bowl party that everyone looked forward to, for over 30 years, until her health failed.

Ruby was preceded in death by her parents, brother, ex-husband and son, George.

To order memorial trees or send flowers to the family in memory of Ruby Weaver, please visit our flower store.