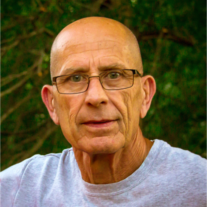 Russell (Rusty) David Mathews, 68, passed away Saturday, May 13 surrounded by family at home in Lee’s Summit, Mo. He was born on July 17, 1948 in Denver, Co. to Gerald Mathews and Charlotte Penrose Mathews.
Rusty grew up in Independence, Mo. where he graduated from Van Horn High School in 1965. As a child, he loved being outside playing sports with friends, riding his bike, and spending time with his dad, working on their family home. After high school he studied at Missouri State University in Springfield, Mo. where he pitched for the school’s baseball team. He quickly realized he would rather serve his country instead of continuing his education, so he joined the U.S. Air Force in 1968 and served for four years. He was stationed in England for two years as an I.T. Specialist and was honorably discharged in 1972, achieving the rank of Sergeant.
Rusty had an eclectic mix of jobs after serving in the Air Force. When asked, he’d often say, “you name a job, I’ve probably done it.” Many of those jobs were in law-enforcement and security in which he worked directly with the Kansas City Police Department. He began work as a serviceman for Missouri Gas Energy in 1985 where he retired in 2013 after 28 years with the company.
While working security for Macy’s department store in Kansas City, Mo., Rusty met a sales clerk, Anita Barresi, and the two were eventually married in 1981. They were happily married for 36 years. Rusty had many interests but few hobbies. Being a Jack-of-all-trades, he was able to deconstruct, reconstruct, and fix anything around the house. His granddaughter, Harper, once stated very matter-of-factly, “Papa can fix anything.” He enjoyed working with tools and often bought new ones that he’d have to find a reason to use, even if it meant remodeling the bathroom for the third time. He loved to be outside and was very meticulous about his yard work, sometimes spending the entire day making sure he had the best looking lawn in the neighborhood. Rusty had a knack for computers and enjoyed learning about new technology, which he used to research his interests in medicine and the government. His family often joked about his precise memory of locations around Kansas City and referenced his in-depth knowledge of any and every topic of interest. Rusty recently told his family that “every day is a blessing.”
Rusty was preceded in death by his parents, Gerald and Charlotte Mathews, and his grandson, Austin McClure.
Rusty is survived by his spouse, Anita of Lee’s Summit, Mo.; his daughter, Marra (Michael) McClure of Lee’s Summit, Mo.; his son, Garrad Mathews of Lee’s Summit, Mo.; a sister-in-law, Jeanne (Thomas) Townsend of Lee’s Summit, Mo.; a brother-in-law, Andrew (Larry Summers) Barresi of Kansas City, Mo.; his granddaughters: Harper and Madison McClure of Lee’s Summit, Mo.; a niece, Lauren (Sarah Owsley) Townsend of Independence, Mo.; and niece, Alyson (Daniel) Martin of Greenwood, Mo.
A funeral service will be held on Thursday, May 18th at 1 p.m. with the visitation one hour prior at Longview Funeral Home, 12700 South Raytown Road, Kansas City, Mo. 64149. Interment will follow at Longview Cemetery. In lieu of flowers, the family suggests donations to Crossroads Hospice.
To order memorial trees or send flowers to the family in memory of Russell Mathews, please visit our flower store.