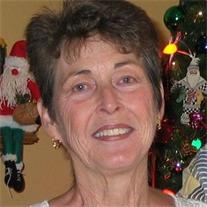 Shirley Ann Thomas, age 76, of Lee’s Summit passed away at Kansas City Hospice House on August 27, 2010 after a brief illness. Born in Kansas City on February 26, 1934, Shirley spent most of her life in the metro area.
She graduated from Paseo High School in 1951 and worked in insurance administration. On February 5, 1954, she married Ronald Gene Thomas—the love of her life. Gene predeceased her in January of this year.
In 1987, the couple formed Crest Flavor Company, specializing in agricultural feed flavors. In 1992, they built a manufacturing facility in Grandview and in 1999 the plant’s capacity doubled. Gene and Shirley sold the business in December 2009. Shirley also was involved in regional administration for the United States Census in 2000.
Shirley served many years on the Board of Directors of the Raintree Lake Property Owners Association and until her death, she served as Chairperson for the Common Ground Committee and Chairperson of the Siltation Committee. Other civic volunteer involvement included important positions for the City of Lee’s Summit--the 21st Century Initiating Committee, the Implementation Committee for the 21st Century Strategic Plan, the Storm Water Task Force, and the Lee’s Summit 360 Strategic Plan.
Shirley was a lover of life, an adventurer—from her early days spending summers with her family at Lake of the Ozarks to the many trips she and Gene took to observe and learn about different cultures.
She loved sailing on “Gemini”, the boat she and Gene often launched from their slip at Lake Jacomo. Whether it was scuba diving in the Cayman Islands, taking a train across Mexico, riding horses at a dude ranch in Colorado, rock hunting in the Southwest, blue water sailing in Belize, or cruises in the Inland Sea of Japan, off the coasts of Alaska and Spain, and on the Rhine River, Shirley embraced travel with zest. Before she returned from one trip, she always had plans for the next adventure. After Gene’s passing, she continued to travel to see family and friends in the U.S.
Much of the couple’s travels to the Southwest included collecting Native American artifacts and that outstanding collection has been bequeathed to the Spencer Museum at the University of Kansas.
Her keen appreciation of nature gave her the ability to identify a bird’s call or a rare plant. She was a voracious reader of many different genres. She was proud of her Cajun heritage on her Mother’s side and had a broad knowledge base of that culture.
Shirley was a loving and devoted wife to Gene as well as his helpmate in business. To those who knew Shirley best, she represented the qualities of determination, dignity, poise and grace as well as being known as an unusually good listener.
Shirley was preceded in death by her beloved husband, Gene; her parents Frank and Viola (Vivi) Wondraska; brothers-in-law Robert Dean Thomas and Richard Reid Koch, Jr.; niece Stephanie Thomas Gaetke; and nephew Jay Deeter.
Survivors include Shirley’s sister Pat Deeter (Jim); sisters-in-law Joanne Saathoff, Hazel Thomas, Patricia Koch, and Paula Houston Koch; nieces Sheri Deeter and Shelia Klumpp; nephews Reid Walters, Steven Saathoff, and Kip Deeter; and best friends Kim Rock and Bill Barr.
Special thanks go to the staff of St. Joseph Medical Center, Villa St. Joseph and Kansas City Hospice and Palliative Care for the compassionate care given to Shirley. She is in Gene’s arms now—exactly where she wanted to be.
A visitation at 2:00 PM followed by a Celebration of Life Service at 3:00 PM will be held on Wednesday, September 1, 2010 at Longview Funeral Home and Cemetery, 12700 S. Raytown Road, Kansas City, the Rev. Duke Tufty officiating. A Celebration of Life Reception will be held after the service from 4:00-6:00 PM at the Raintree Lake Clubhouse, 825 SW Raintree Drive, Lee’s Summit.
In lieu of flowers, please consider donations to the Kansas City Art Institute Advancements Department Scholarship, 4415 Warwick Boulevard, KC, MO 64111 or Kansas City Hospice House, 12000 Wornall Road, KC, MO 64145.(Arr: D.W. Newcomer’s Longview Funeral Home)
To order memorial trees or send flowers to the family in memory of Mrs. Shirley Thomas, please visit our flower store.