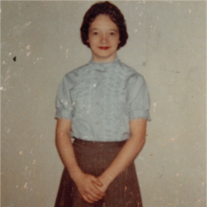 Stella was born November 9, 1942 in Kansas City, Missouri the daughter of Charles Anders and Laura (Chastin) Anders.  She attended grade school in the Ruskin school district and graduated from the 8th grade in 1957.

She married John Lee Stutzman in 1959. In their early years they resided on 5 acres in Raymore, Missouri.  A place she and her family held many fond memories of. She was a full time homemaker during the years their 4 children were young. She loved to craft especially with Artex painting patterns and paints. Stella also really enjoyed bowling and much of her life was spent in the sport recreationally. A hobby her children grew to love as well and became a family tradition.

After John’s retirement in 1992 they settled in Garden City, Missouri. She enjoyed putting together puzzles, tending to her flower gardens, mowing the grass on their 20 acres, watching the Kansas City Royals and she was a huge Kansas City Chiefs fan.  She had a real heart for animals and while she owned and care for many over the years she especially was close to her Shelties, King and Max.