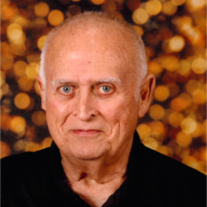 Willard E. Huggins, 78, of Lee’s Summit, MO passed away on September 22, 2017.
Willard was born on August 30, 1939 to Oscar and Esther Huggins in Olathe, Kansas. Willard will be remembered for being a devoted father and husband. He married Carolyn Yeager on March 25, 1977. Willard served in the US Army. After his service, he spent the majority of his career as a cement mason and entrepreneur. Everyone knew he was a proud fan and supporter of the Kansas City Chiefs, and he was on a bowling league for many years. Willard lived his life doing what he thought was best for everyone else and will always be remembered for it.
Willard was preceded in death by his wife, Carolyn Huggins; his parents; and his brother, Oscar. He is survived by his children: Teresa Martin, Craig Huggins, and Christopher Huggins; his grandchildren: Frankie (Bryan) Davis, Jessica Huggins, Tamra Huggins, Angel Huggins, Nikki Huggins, and Alexandria Huggins; 11 great-grandchildren; and his sisters: Darlene, Dorothy, Linda, and Bonnie.
A funeral service will be held on Wednesday, September 27th at 2:00 pm at Longview Funeral Home, 12700 S Raytown Rd, Kansas City, MO 64149, with a visitation from 12:00 pm – 2:00 pm. Interment will follow in Longview Cemetery. Memorial donations are suggested to KC Hospice House.
Please click here to view the video tribute
To order memorial trees or send flowers to the family in memory of Willard Huggins, please visit our flower store.