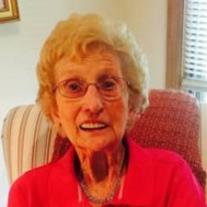 Wilma was born on May 27, 1926 to Harvey and Viola Bristow in Kansas City, Missouri. Wilma married Paul Eugene Smith, who preceded her in death, then later married Kenneth Bowman. She retired from John Deere after working there for 33 years.

Funeral service will be held on Thursday, October 15th at 1:30pm at Longview Funeral Home, Kansas City, MO with a visitation from 12:00-1:30pm. Interment will follow in Longview Cemetery. Memorial donations are suggested to Woods Chapel United Methodist Church.
To order memorial trees or send flowers to the family in memory of Wilma Bowman, please visit our flower store.