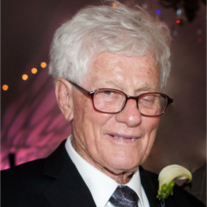 Woody came from meager, humble beginnings as an orphan in the state of Kentucky. He entered the Armed Services as a young man and proudly served his country all over the world.  He had a true passion and talent for baseball, was an avid lover of dog and horse races, and was one of the funniest people you would ever meet.  He will be remembered for being one of the most compassionate, kindest, giving men this world has ever known. He never met a stranger and would give anyone the shirt off his back.

A funeral service will be held Wednesday, December 30 at 12:00pm at Longview Funeral Home and Cemetery, with visitation from 11:00am to noon. Graveside service will follow.

Donations may be made in his honor to the Kentucky Children’s Home: 8711 La Grange Rd, Louisville, KY 40242 or the Kansas City Retired Greyhounds as Pets (KC REGAP): 7400 E 102nd St, Kansas City, MO 64134.
To order memorial trees or send flowers to the family in memory of Woodford Blake, please visit our flower store.